Breizh Pan’ Crepes was a dream of Patrice and Celine.

Patrice and Celine have learned the art of cooking traditional western French cuisine from the best French master chefs at the “Ecole des Chefs”. Here is where they were trained to respect food, cook with quality products and know the art of making the genuine crêpe 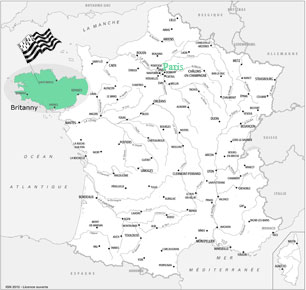 Patrice was born and raised in Brittany in the western region of France: the country of the real French Crêpes. They both come from Quimper.

Patrice comes from a family of cooking. His brother has been a chef for many years while his sister was served as assistant chef in several prestigious French restaurants, After a military career of 16 years in the French army where he has traveled around the world, Patrice decided to enter the private sector and follow a commercial/management career. He then worked and trained in the various restaurants of Britanny . While on a trip to the East Coast of the USA, he decided to change his life and come to live in Charleston in order to discover its region and its culinary culture.

Celine's passion for cooking was as an assistant culinary manager. In her youth, she worked in crêpes restaurants and always loved making pancakes for her family and their friends. Following her dream of discovering a new country and a new culture, she decided to follow her husband in his project.

Patrice and Celine have three children, two boys, Erwan and Tristan of 20 and 18 who are studying in France and 7 year old daughter, Elyn who lives with them.

Brittany's savory and sweet crêpes are definitely the best-known specialties from the western region of France. Whether sharing some with friends at home or relishing them in a genuine crêperie, these Brittany delicacies either filled with chocolate and fruits or with ham and mushrooms represent the important social aspect of French gastronomy with fresh foods.

Although it may be possible to enjoy Brittany-style crêpes at other local venues, Breizh Pan Crepes will always remain the authentic Charleston crêperie that prides itself on providing quality French food in an authentic atmosphere.